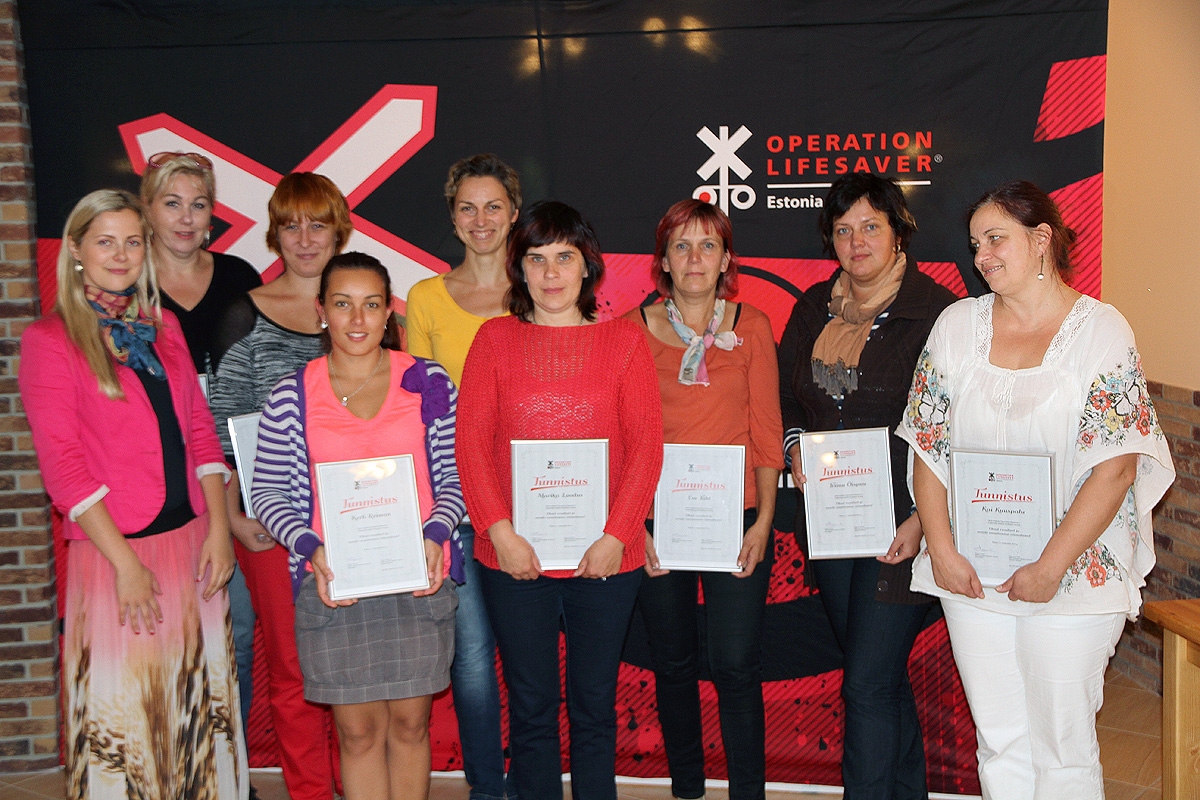 [image_frame style=”shadow” align=”left” alt=”” title=”13 New Railway Safety Presenters Trained this Autumn” height=”200″ width=”300″]http://ole.ee/wp-content/uploads/2014/01/IMG_6278-v.jpg[/image_frame]This year has been particularly active in the area of presenters’ training, as for the first time in history, OLE organised three courses for presenters instead of the usual two. The last two training courses were organised in Seedri Holiday Farm in Võru County (in September) and in Veskisilla Hotel in Järva County (in November). After two-day training courses, OLE’s presenter certificates were issued to Marika Luik, Kai Kuuspalu, Reesi Efert, Kerli Leiman, Christina Vallimäe and Diana Okas from the Estonian Road Administration; Airi Oja, Anneli Katkosilt and Kädu Aasma from the Western Prefecture of the Estonian Police and Border Guard Board; Triinu Õispuu and Maarika Loodus from the Estonian Rescue Board; Eve Täht from the Estonian Defence League and Merle Saar from Klaabu OÜ. All the new presenters had also taken a training course on both railway safety and presenters’ skills. The daily work of OLE presenters is often closely linked to the safety issues and therefore we are glad to admit that they had the wish to improve their knowledge in the field of railway safety as well. In the end of the course all the participants admitted that the training was interesting, diverse and provided them with an excellent basis for becoming involved in the railway safety prevention work.

It is also remarkable that at one of the training courses organised participated a youth police officer from Hiiumaa island where there is no railway at all. She admitted that during the two training days she thought several times what could be told about railway safety in Hiiumaa, as the islanders rarely go to the mainland and they do not have much interaction with railways. After a joint discussion we admitted that dangers should be known before facing them because if you meet a train at a wrong time and in the wrong place without being aware of the potential dangers, you often miss your chance. It is very positive that the number of fatal railway accidents has shown a decrease in recent years but even one person killed is to many. Only this year 4 people have lost their lives as a result of railway accidents. We really hope that the contribution of OLE and its new presents will help to reduce the number of people killed on railway also in the future.

During its nine years of activity, OLE has organised 13 presenters’ trainings attended by 83 persons, 2 of them got the presenters’ certificates in 2013. The training courses were held by Chairman of Management Board of OLE Tamo Vahemets and Training Manager Getter Toome.
We wish you a safe Christmas season.

OLE (Operation Lifesaver Estonia) is a non-profit organisation founded in 2004 by the initiative of AS Eesti Raudtee (Estonian Railways) with the mission to increase considerably public awareness about dangers involved in railway traffic and lawful behaviour on railway, with the purpose to reduce the number of railway accidents and people killed and injured in such accidents. OLE’s members are AS Eesti Raudtee, AS EVR Cargo, Edelaraudtee Infrastruktuuri AS and AS GoRail.